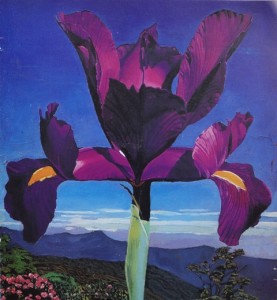 This compilation of some of Bryan Charnley’s early paintings dates from 1968 to 1981. Several of the earliest works featured were completed before  the age of 18. They are: Head, Caroline, Blue Still Life, Still Life with Mallet, Cup and Light and Portrait of Jonathon Hamden-Smith.  The paint is handled loosely but with great assurance. “Broken Madonna” painted around the same time is Bryan’s earliest attempt  to express what was then termed a “nervous breakdown.” While at art school from 1969 to 1971 his work reflected the ethos of the time which generally discouraged easel painting and encouraged experimentation. Bryan’s work at art school was mainly sculptural and he  it wasn’t until 1978 that he began to paint again. He originally hoped to be able to support himself through his work so looked for portrait commissions and worked in a photo realist style most evident in the large flower paintings, the “Columbine “being a good example. However the stigma of mental illness and the heavy medication he was prescribed made life difficult. His parents were supportive and were able to help in buying artist materials and living expenses but could do little to help him in his career.  Unfortunately Bryan was continually confronted with his position in society as a schizophrenic. This made normal social contacts difficult and mitigated him getting exhibitions of his work for example. Ultimately he was forced to acknowledge that this condition was a central aspect of his life and his paintings.